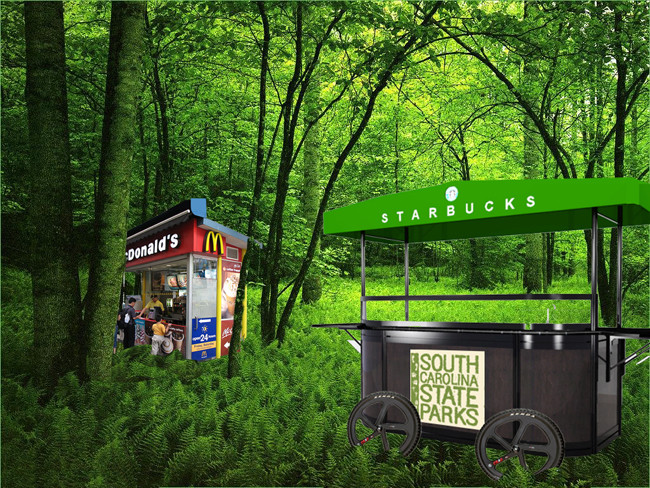 Artist's rendering of what the mobile shops located in State Parks will look like.

Update at the Bottom:

One thing most South Carolina politicians agree on is that taxes are too high and a need to cut spending.

The 2012 South Carolina budget was a staggering $22.8 billion, the largest in the state's history. Of that $22.8 billion,  $5.7 billion came from general funds tax payer money.

In an effort to lower the 2013 state budget, the House is looking to pass a bill that would remove all tax funding from state and municipal parks, and therefore creating a tax cut of 0.056% per South Carolinian tax payer. When asked to comment, State representative Tim Scott said, "This is a wonderful, forward thinking bill that when it comes down to it, will give everyone in South Carolina some much needed tax relief," Scott said. "A tax cut is a tax cut, no matter the size."

Counties and cities will be able to choose to use tax revenue for their own parks but are encouraged to follow the state's lead in the forefront of privatized, corporate sponsored parks.

What does the vision for a "privatized, corporate sponsored park" look like?

"Not only is this a great relief to South Carolina tax payers," Governor Nikki Haley told us via a phone interview, "but this is a job creator and will get hundreds of South Carolinians back to work." The state's plan demands that state parks remain free or low cost of entrance but, to subsidize the overhead parks will now have what Haley is calling "Micro-Malls."

These Micro-Malls, will be small shopping areas inside each state park, state beaches and historic sites. The number of Micro-Malls per site is not clear at this time,  but each Micro-Mall will have only three stores and located near existing restrooms and pathways.

"These Micro-Malls will help keep the nature and beauty of South Carolina pristine and help motivate more tourist into taking another look at the wonderful beauty South Carolina has to offer."

This 21st Century approach to conservation and preservation already have corporations locked into decade-long deals. Once the legislation passes and receives Haley's signature the state's corporate partners will start to "revolutionize nature."

Some of the expected South Carolina Parks and Recreation sponsors include:

"South Carolina is all about small businesses that's why we're so excited to announce this endeavor. This initiative will create hundreds of jobs for South Carolinians and help solve the state parks budget concerns and relieve the tax burden on the majority of our citizens who feel they personally have no need for parks or protected wetlands."

We asked a few local citizens their thoughts on the matter, Dean Blumberg of Myrtle Beach simply said, "What?" and walked away shaking his head when asked his thoughts concerning this legislation. However, Dale Greenwood of Aynor had a diffrent reaction, "I don't know why I have to pay for parks I don't even go to or waters I can't even fish in." Greenwood concluded, "I mean the lands just sitting there doing nothing, why not make money on it?"

We'll keep you posted on this story as it progresses, until then, for more information click on over to here and for our exclusive interview with Governor Haley hop on over here.

Update April 1st. 1:30 p.m. Our exclusive on the state's plans for parks, beaches and historical sites has sparked some serious outrage and support.

Some calling this move, "brilliant," while others saying, "Well, it could be worse." check out the mixed reactions and more infromation about this legislation HERE.